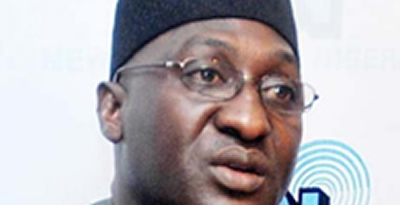 The translated versions of the Freedom of Information Act in three Nigerian languages of Hausa, Igbo and Yoruba, were unveiled on Friday in Abuja by the National Orientation Agency (NOA).

Unveiling the documents, Mr Mohammed Adoke, the Minister of Justice and Attorney-General of the Federation, said the translated versions would give meaning to the Act.

Adoke, who was represented by Prof. Adedeji Adekunle, his Senior Special Adviser, commended NOA for being proactive, adding that the translated versions would help Nigerians to understand the Act.

He said it was necessary for Nigerians to understand the running of government, adding that Freedom Of Information(FOI) Act would provide the needed information on what the citizenry should know.

Mr Edem Duke, the Minister of Culture, Tourism and National Orientation, represented by Mrs Nkechi Ejele, Permanent Secretary in the ministry, said any good Nigerian should appreciate the FOI Act.

He said that the FOI Act would help the citizenry to know how government spent public funds and ask questions on the running of government affairs which hitherto was not possible.

``This has opened our eyes to the principle of honesty, probity and integrity as a people,’’ he said.

The minister called on the citizenry to take advantage of the FOI Act and make public officers accountable to the people.

Earlier, Mr Mike Omeri, the Director-General of NOA, said until now, many Nigerians could not authoritatively discuss the content and import of the FOI Act and its relevance to the people.

He said that information management in Nigeria had been dogged by secrecy and censorship and applied to the detriment of the people.

``The FOI Act has been enacted to cure that mischief; but laws remain dormant and only come to life when their provisions are given effect,’’ he said.

Omeri said those the law was meant for needed to be sufficiently-educated on its provisions, adding that the need for people to understand informed the reason for the translation of the Act into the three main languages.

He, however, said that the agency would not relent in its effort to translate the document into other Nigerian languages. (NAN).